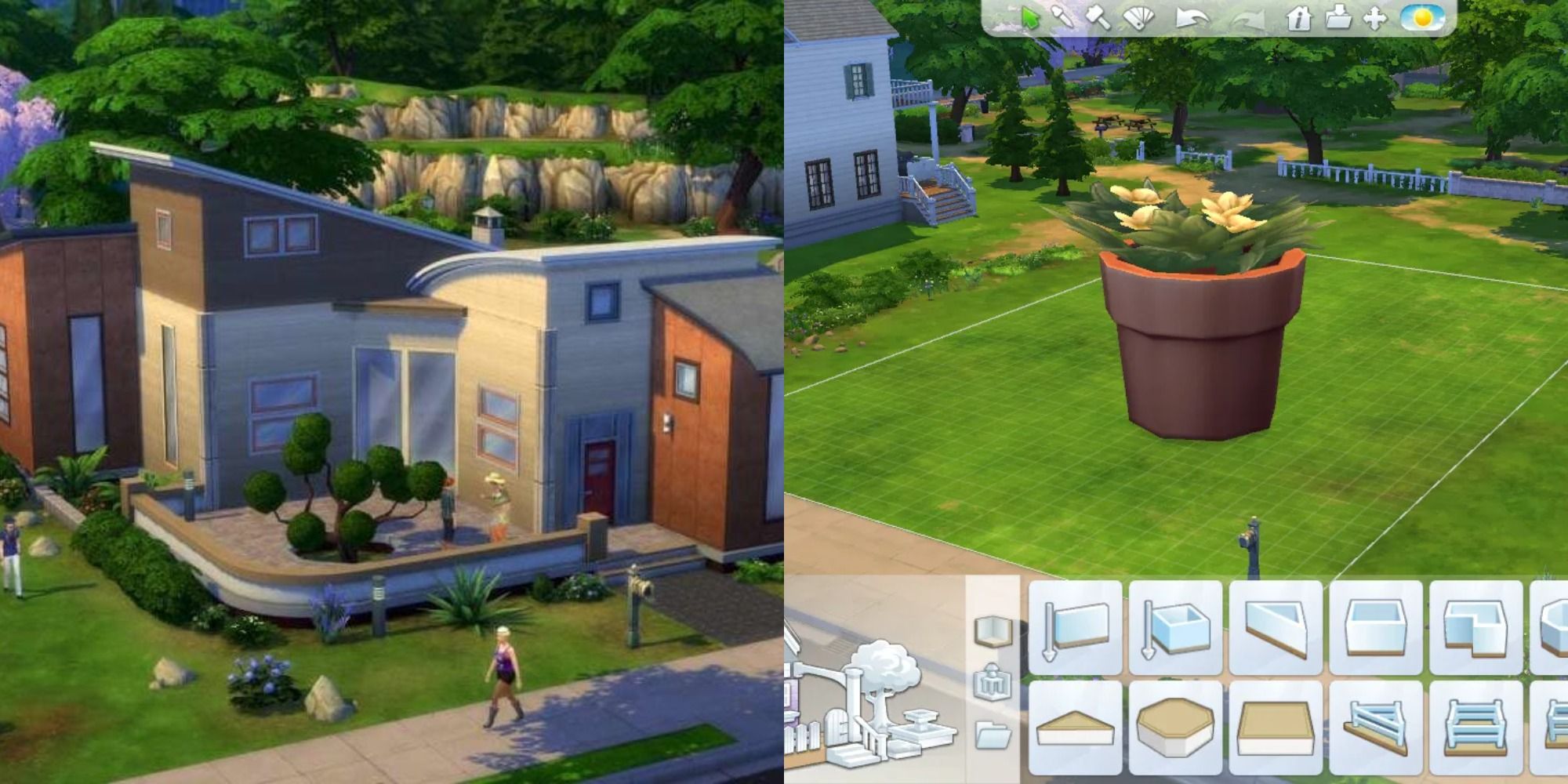 The Sims 4 is a rapidly evolving game with many new DLCs and patch updates on the way, making cheats more and more powerful than ever. New The Sims 4: My Wedding stories game pack, will revolutionize the traditional style of sims marriages and relationships when it is released in February.

Cheat codes in The Sims franchise are as famous as any character in the games. Many cheats have covered all 4 incarnations of The Sims and are instantly recognizable. With a game as vast as The Sims 4 and offering countless gameplay options, many gamers are looking for a shortcut. sims cheated can range from vast riches, to free furniture, to killing sims and bringing them back to life. Since the release of The Sims 4 in 2014, cheats became more powerful than ever in gameplay.

The players of The Sims 4 will know how ridiculous the sizing of certain objects can be. Items like the huge cupcake maker have become a meme among sims players to be hard to fit into sims homes, making them hard to use.

Using Shift + ]/ [ in build and buy mode allows players to size objects up and down. This can help reduce objects that cannot fit in tight spaces. Alternatively, they can make small objects, such as toys, easier to see. Best of all, objects can still function after changing size. This cheat is limited, however, in that sims interactions often don’t accommodate the new size, leading to glitchy animations. Sims developers have tried to override this issue by offering more sizes in patch updates. Still, the problem persists.

moodlets in The Sims may affect gameplay. When a Sim feels too uncomfortable, they can refuse to do tasks. Emotions with strong points, like sadness after witnessing a death, can put a Sim in a bad mood for days. This often results in sims refusing to engage in activities the player wants them to do.

Sims.Remove_All_Buffs removes all moods from a selected sim, leaving them feeling good. Moodlets from previous activities will no longer affect the simulation. For a while, however, sims won’t have strong feelings about their activities. Fortunately, the moodlets are coming back quickly. Unfortunately, this cheat erases all moods rather than individuals, a problem from the ground up. sims fans tried to fix via mods, only available for pc.

Is there anything more frustrating than trying a long activity with sims, like going on a star wars expedition or exploration of the jungle, and the sim is tired? A sim’s needs can provide realism, but can inhibit gameplay when adventuring.

Using Sims.Fill_All_Commodities will set all of your sim’s needs to the max. This makes it easier to run long tasks without interruption. Some sims activities, such as songwriting, must be completed in one go. If a Sim is about to go to work, a good mood during work will prevent them from being stressed, which will help them earn a raise or a promotion. For players who prefer a sense of realism, this cheat may not be of frequent use.

Some lots on The Sims cannot be changed. Public buildings such as parks or workplaces cannot be redecorated. This can be a problem if Sims frequent these lots. In The Sims 4: University expansion pack, Making a dorm personal can be tricky when the game doesn’t allow changing decorations or furniture.

By enabling Bb.EnableFreeBuild, players can decorate any terrain as they wish. Players can add any last minute items a sim may need, as well as remove items. If a prefab lot doesn’t match the gameplay, simmers can add customizations or tear them down.

Some objects on The Sims are not available for purchase in build and buy mode. Many objects are reserved for the decoration of the spaces of sims worlds that cannot be modified even via bb.enablefreebuild. These are called environment objects or debug objects.

Enabling the Bb.ShowLiveEditObjects cheat allows simmers to access over 1000 hidden objects to add detail to custom builds. Even better, the debugging stuff is free. These can add additional customization, which is helpful when building a budget. This is one of the best cheats The Sims has to offer, as it allows players to replace anything missing when builds were created by its developers.

When a new household is started, it can be annoying to The Sims only provides a budget of 20,000 simoleons to buy a house. If a player has a rich simulation in mind for the gameplay, it doesn’t fit the story in mind. Although money tricks are available, moving into a cheap property to add simoleons is a waste of time.

The FreeRealEstate cheat allows players to move into the household of their choice. This avoids having to save thousands of simoleons to buy the ideal house. The cheat allows simmers to focus on the life simulation aspects of The Sims rather than saving money. There are few cons or issues around this cheat but it requires other money cheats to pay rent and decoration.

New sims households always start unemployed and at the bottom of the career ladder at the start of a new game. It can be boring because it takes a lot of time and skill to work up to the desired job.

Hitting Careers.Promote in the hints log will allow the simulation to move up one career level per entry. This cheat comes with all the cash bonuses and career reward items that come with every promotion. Players can skip one of the more difficult elements of the sims games – develop skills and work hard to build the career bar until promotion. This cheat provides additional control over what career level the sim reaches, rather than straight to the top. For players who like to smash their way around, this cheat won’t be used often.

The grid in build and buy mode can be useful in determining the spacing of builds so that they work well in live mode. However, the grid system can mean that objects are misplaced.

Using Bb.MoveObjects can allow simmers to place an object wherever they want without grid restrictions. This adds an extra level of custom design. Players can add objects on top of each other. On occasion, sims will not be able to reach said items and use them. In the majority of cases, however, they still work, making this one of the most useful cheats in the game. Bb.MoveObjects also helps with some of the more glitchy aspects of The Sims, because many simmers will be familiar with their sim shouting “Choo Wagga Choo Choo!” because there is a plate on the floor.

Occasionally sims randomizations can make sims look weird, especially when genetics are involved. Many players know their SI am characters inheriting Vlad the Vampire’s infamous eyebrows. City dwellers randomized in sims the worlds also prove distracting when they show up wearing a hot dog costume on a date and ruin the illusion of gameplay.

Cas.FullEditMode allows players to make unlimited edits to a simulation as if starting from scratch. Any part of the sim’s appearance, from their eye color to their bone structure, can be changed. Even better, if a sim grows up with unwanted traits, the cheat allows players to change a sims personality to suit the character. This cheat is one of the best cheats The Sims has to offer because of its limitless capabilities.

Motherlode is the most iconic cheat in The Sims franchise. He’s appeared in every iteration of the game since. The Sims The original game was released in 2000. Rather than working hard to earn simoleons, sims can hit the jackpot when the cheater adds 50,000 simoleons to their bankroll.

Money is all in The Sims. It puts a roof over a sim’s head and allows them to buy the items to meet their needs and make their house a home. Simoleons are essential for getting into town and enjoying local experiences, or exploring new worlds. Have funds in The Sims is needed to simply keep a sim alive, buying them food to keep them from starving. The Motherlode cheat is the most essential cheat in the game, and the most popular among simmers for good reason. This necessity makes Motherlode the biggest and best cheater of all sims franchise.

Next: The 10 oldest video game franchises in history