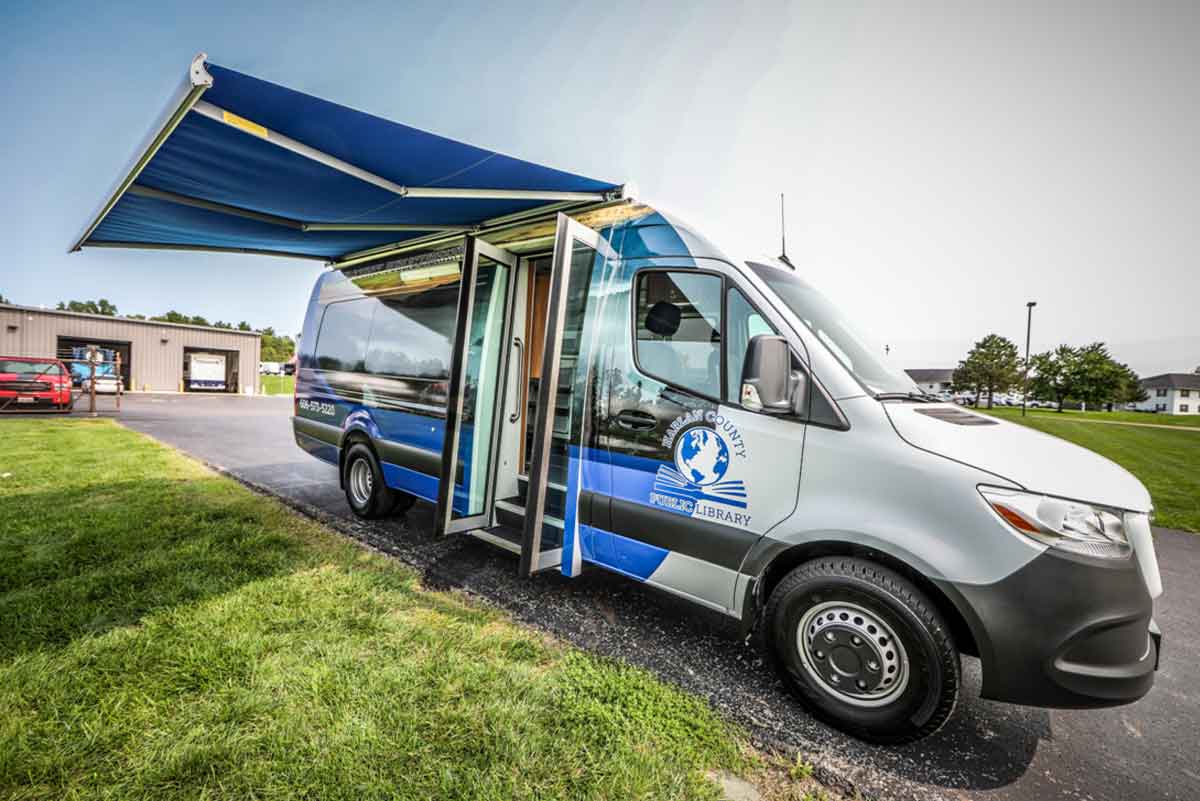 The Sims Library will take its collection on the road, bringing all library services from its downtown location to all areas of the city. Barbara Claspell and Jen Graf provide the details in this episode of the Waxahachie 360 ​​podcast.

Marshall Hinsley: The Sims library is growing. The plan to bring books and library services to every neighborhood in the city in this episode of Waxahachie 360 ​​I Am Marshall Hinsley.

Despite the 20-year trend of digital media replacing books and newspapers, the Nicholas P. Sims Library is doing more than ever in its century of serving Waxahachie area residents, checking up to 17,000 tangible items each month, as it serves as an organized and reliable source of information.

The library also offers high-speed Internet access, educational programs for all ages, and a sense of community with librarians who can help with everything from school research papers to resume writing.

The library faces a major challenge, however: its Waxahachie location has expanded primarily northward.

With some Waxahachie residents now living more than a 30-minute drive downtown from the library, Sims is no longer a convenient stop for most people to add to an afternoon of groceries and work. To reach all the new parts of the city, the city would need to fund a network of library branches, and that would take more money than the city has.

So library manager Barbara Claspell has come up with a sort of Plan B library branch solution that she will literally roll out in early 2023 in the form of a custom Mercedes-Benz Sprinter that will become the very last Sims library travel location.

Barbara Claspell: I’m going to compare the bookmobile to Amazon vans going around and they’re going to have shelves on them where we have books, DVDs or whatever.

Customers will be able to check the material. We will have a small program for children. They can make a resume. We will have a hotspot on it, DVDs. It’s got a generator and it’s going to be air-conditioned and where we’re going to drive it to the four different locations, directions in town so people can come and visit it. They can return their books to the bookmobile, or they can pick up their reservations there.

Marshall Hinsley: The bookmobile will be more than just a convenience for library patrons. Claspell says nearly 20% of Ellis County residents don’t have computers or high-speed internet access. More than 10,000 families manage with just one car. And nearly a thousand families have no vehicle.

For them, the bookmobile will be a lifeline that will put the library’s collection at their fingertips, as well as the ability to explore job opportunities and take care of other business online.

Barbara Claspell: I’ve wanted to since I’ve been here. It’s a good way to reach people and be part of the community

And then they will take it not only in the different directions; they’re going to take him to retirement homes, to day care centers, to schools.

If they have events in the park, we’ll take it there – any place we can think of to take it, we’ll take it there because it’s going to commercialize the library all the time . When I first came here a lot of people said they didn’t even know we had a library and it’s been here a long time, and we’re just trying to make it more relevant and keep it so that we keep the doors open and keep the customers happy and get what they want and everything.

Marshall Hinsley: Jen Graf is the community services librarian for The Sims who will be taking out the bookmobile for her sessions, and she says she has a vision for how it’s all going to go

Jennifer Graf: So that’s my vision. OK. So if that plays out true, we’ll see. But, so we will have the ability to play music. So I would like, an entry like this, like you think the ice cream truck, like the kids know, like the moving book is here.

As if I wanted it to be exciting. So I want them to know that I’m not talking about breaking codes or anything for music, like just music to get them, oh, bookmobiles here, or whatever. So we stop and we have an awning. It will come. So depending on the type of program.

So let’s say we’re in a daycare, there will be an awning that will come out. If the weather is good, I hope the program can be outside, like in front of the book, the mobile and things like that. We will have a television on the side. So if we have music or something like that, we’ll have stuff like that on TV for kids to engage with, that’s a long time.

So story times usually go from musical songs, read a story, do some more song and dance and things like that, get the kids out – we’ll do our program, whatever it looks like, let it be whether it’s playing games or if it’s an older group we might be doing robotics or something like that but once the program is over the kids will have the opportunity to get on the bus.

So daycare centers would have an institutional card where teachers could pick up children, they could borrow books and then stay with them. So they could take a little tour of the bus, choose books. If the parents are with them, whoever is able to get a library card – that would also be fully functional on the mobile book.

So we would stay there and we generally think about the programs; it will be about an hour. So that will be time for a 30-minute story hour plus time for the kids to check out books and things like that. And then hopefully play a little tune when we walk away. Carts are able to pull things out if it’s a large group or something; we could pull out the carts, so you don’t have a hundred kids trying to get into the moving book at the same time, but if we did, we’d be able to line them up and the kids could go through the books that way too. So if time allowed — if time didn’t, we would bring the program to that organization and do some crafting there.

Maybe when we go to nursing homes and things like that, maybe it’s not feasible for everyone to go out. So we could roll the carts inside to customers. So they could also access the books. What’s cool is that even though we don’t have the books on the book, mobile, if there are books, people want, they can put them on hold from the library and we can also put them on hold. to bring them.

Lots of different opportunities, but that’s how I see us, like rolling in a place, it’s just music. And everyone is oh, the bookmobile is here – run screaming. , we will have to, we will have to understand that.

Marshall Hinsley: Graf says the bookmobile will be active throughout the week, bringing its collection of over 5,000 books to all parts of the city as well as high-speed internet access and everything you would expect from a brick and mortar branch.

Jennifer Graf: I think we could go to more places that would have an impact on children as there are many daycares and schools here. However, we will be going to the center for the elderly – senior – I can’t say this – citizen center. Yes. Retirement homes. We are already doing programs in nursing homes right now where we were going to do crafts with them.

So we would always make a schedule for our retirement homes. Daymark expressed interest in us coming over there and doing programs. It would reach all ages. We just posted — you may have seen it on Facebook — if an organization would like them to be a stop on our route, we’re still open to that at this time.

Marshall Hinsley: Follow The Sims Library and what’s happening in and around Waxahachie by subscribing to our podcast and visiting Waxahachie360.com.

EA plans to reveal details about The Sims 5 “soon”