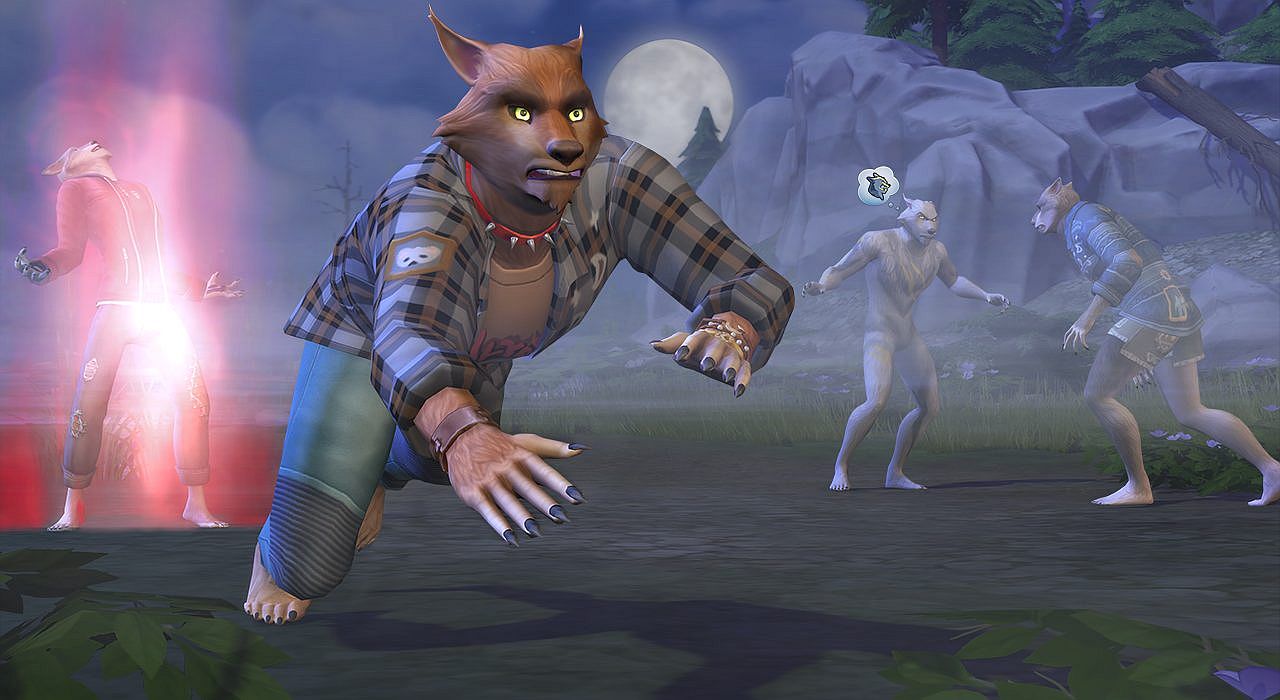 After much teasing, Maxis has finally announced the Werewolves game pack for The Sims 4.

In the game pack, you can create and fully customize your werewolf using Create a Sim. Werewolves can be “fierce, playful, dramatic, or cuddly,” and all start with a Beast and Sim form that are linked. This provides parity and matches the other form. But you can also create your own beast by ungrouping the shapes and making them distinct by changing the facial structure, ears, eyes, tufts, etc.

The pack takes place in Moonwood Mill, an old sawmill town that has seen better days. The community surrounded by wilderness is now filled with the rusting shells of its former industrial glory and provides cover for a handful of “mysterious locals” who have sought out the community.

Although the city may seem a little devoid of things to do, it is not at all. During a full moon, you can go visit Lunvik Lake to see a magical shimmer on the water and possibly spot a Luna Fish. You can also climb up Howling Point to pick a Moonpetal Flower. If you’re feeling adventurous, you can explore The Underground, a network of tunnels that run beneath the city. Here you can uncover secrets and find faster routes to navigate back and forth and even visit the pit, which is basically a werewolf fighting club.

As you spend more time at Moonwood Mill, you’ll uncover insights into its magical roots. You can meet local librarian Wolfgang in the town center and check out werewolf-themed books that document the mysterious beasts. Everyone in town has a few secrets or two, so you’ll want to investigate the neighborhood for books and long-lost items.

You can also interact with the locals, and once you get to know them, they’ll each reveal their pasts and insights into werewolf history. The town’s only non-werewolf has something to share, too, so go chat with Celene Lopez, owner of the Grimtooth Bar and Bunker, to learn all about werewolves.

Apparently there is also a citizen of Moonwood Mill named Greg who is not very friendly. You might want to stay away from him.

The city is home to two distinct wolf packs: the Moonwood Collective – a pack of seasoned, hardy werewolves who value tradition, community, and self-control – and the Wildfangs – a pack of rebellious-minded werewolves. free who value self-improvement, and self-acceptance.

To join either, go to their meeting place and get to know the pack. Once you’re on good terms, the pack’s Alpha will challenge you with a few trials that you’ll need to complete to join. Once you are there, you will have various obligations, you will have to learn the hierarchy and familiarize yourself with the “dos and prohibitions” of the pack. Play your cards right and one day you might even become Alpha.

As a werewolf, your powers will increase to allow you to unlock new abilities. These include fast running on all fours, marking your territory, lunar resistance, and even immortality.

As your power grows, it will also change how you view the world as a werewolf. This is represented by an increasing number of tempers, each distinguishing how your Sim’s fury can grow. At all times, your werewolf’s fury increases, and by using your powers, fighting with other werewolves, hanging out in beast form, temperamental clashes, and being under the full moon, you can increase your fury. Once peak fury is reached, a transformation is imminent.

You can also pre-order the bundle for $19.99 to start playing immediately when it becomes available for all available platforms.

New The Sims 4 expansion lets you become a werewolf