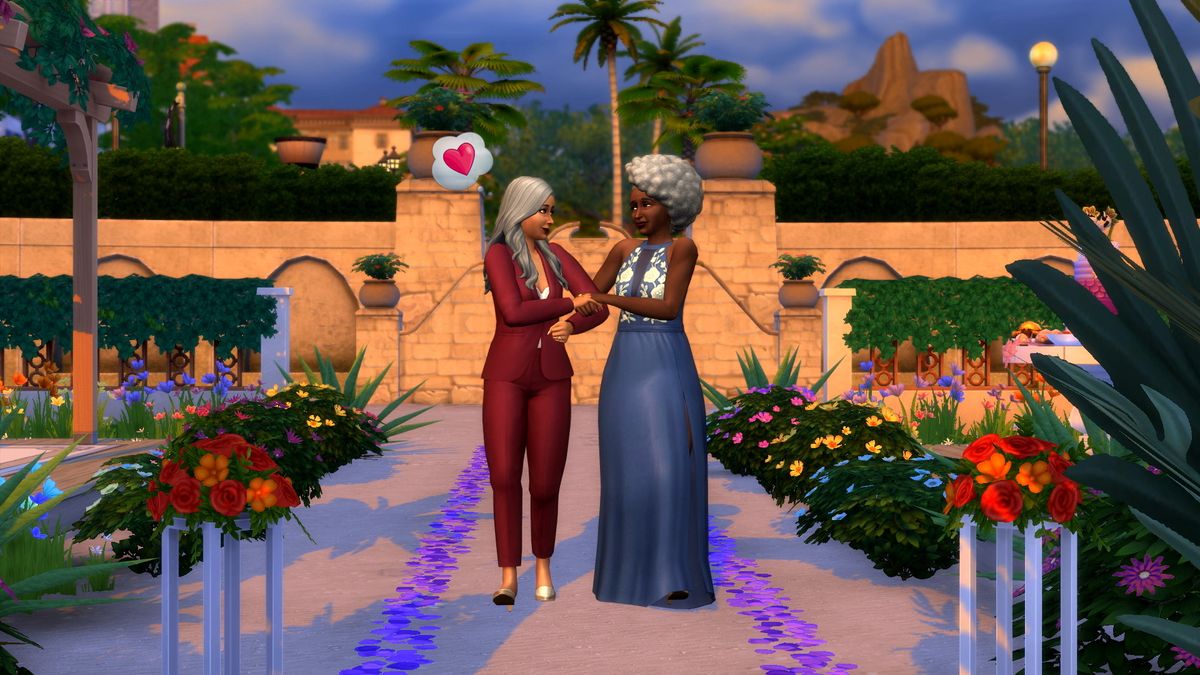 There is something to be said for the power of nostalgia. Many of us of a certain age grew up with an appreciation for early video games that’s probably lost on the younger generation, and I think The Sims franchise is particularly notable for that if you don’t identify as straight. The latest “Wedding Stories” expansion pack offers a host of wedding ceremony-specific features, in addition to placing a same-sex couple front and center in most of its commercials, and as a queer woman who grew up playing the franchise since its first base game, I was in heaven.

If your eyes have started rolling at that, this piece probably isn’t for you – the Sims franchise is, of course, beloved outside of the LGBTQIA+ community, but it holds a special place for queer, curious kids who were able to explore their sexuality, and I’m not going to deprive myself of it.

That’s not to say straight people can’t equally resonate with how the various editions of The Sims have grown with us as a society, because I’m sure we can all share a collective outrage over the game’s features. staples that were present in the original Sims released in early 2000, slowly becoming paid content in DLC packs as the series evolved (EA hot tubs? Really?).

That’s not bad – The Sims franchise has always provided great representation of the gay and bisexual community that was generally lacking elsewhere. While you couldn’t marry gay in the original version of The Sims, the simulation game never stopped you from having same-sex couples or allowing them to move in with their partners.

There were very few games that allowed for this kind of interaction at the time, mainly a handful of RPG titles where NPCs’ sexual identities are swept under the rug – for example, Fable’s male protagonist is able to romance and marry an NPC. regardless of their gender, but while a union between him and a female character is treated legitimately, marrying a man is comical and seen as “just some dudes being dudes”.

Remember kids, it’s not gay if it’s just you and The Boys™ joking.

Fortunately, things have changed a bit over the past two decades, with The Sims 2 introducing a “Joined Union” which was identical to a regular heterosexual marriage in all but name, and same-sex marriage being officially introduced in The Sims 3. Before that, you could install mods that would force gay marriage into the game, but that’s not ideal for those who only like to play with approved game content.

There are also plenty of weird characters in The Sims lore (yes, this franchise has established a lore to follow), like Dela Ostrow and Mia Hayes, two women in relationships who feature on an updated version of The Sims box set. 4, and many of the expansions have at least one pre-made same-sex pair you can play with.

Still, Marriage Stories is the first DLC pack for The Sims that puts same-sex relationships in the spotlight, with a marriage between two women being the focus of much of the marketing material. It was not a sidelined representation, but rather proudly displayed directly on our faces.

There’s very little difference in the content of the pack itself, whether it’s straight or gay couples planning and arranging a wedding, but seeing sexual diversity so openly represented by a mainstream game franchise really struck me.

I was a few glasses of wine away, having a casual evening and playing with expansion and a few tears flowed. Didn’t feel like EA was monitoring their player base at all with the advertising angle they took which was quite refreshing but it made me smile to think that was the way traveled by the simulation franchise. Going back many years to when I was trying to hide my weird characters from my parents on the family computer, it’s so nice to feel that people like me are actively considered when developing a game rather than afterwards.

Great marketing, shame about the gameplay

That said, I jumped into The Sims 4 Wedding Stories’ latest expansion with a few hiccups. There was already controversy over the game not being sold in Russia due to the country’s restrictive laws on queer content, which drew strong reactions from longtime fans of the series. This decision was eventually reversed after EA announced that all versions of the game would be released on February 23, but with an updated cover art that will remove images of women getting married from the cover art in Russia.

The expansion itself also got a bit of a heat, and honestly, that’s understandable. The game is quite buggy, not to the point where I would say it’s unplayable, but it certainly made the experience a lot more frustrating than it should have been. Wedding guests ignored the dress codes you set and refused to sit still, and brides kept changing wedding attire to name a few issues I encountered.

It was announced on March 3 that a patch was in the works that should fix most of the issues plaguing players, but putting the game on sale in this state in the first place is certainly questionable.

Sul Sul is cooking! 👋 We have a laundry list full of love and fixes. ❤️🛠 Check out the latest list of My Wedding Stories that we aim to fix in an upcoming patch! 🧺📝: https://t.co/PKZoqhsbUN pic.twitter.com/0Sb3r649LCMarch 3, 2022

Here are some of the changes introduced, courtesy of the official Sims 4 Laundry Lisyou:

Unfortunately, with the current game being so buggy, it’s hard to recommend it in its current state, so if you’re serious about getting it back, I’d recommend giving it a month or two for all issues to be resolved outside of it.

You can see where the Sims really have, really tried to meet the standards of representation expected of its fans, with non-Western outfits and wedding traditions included alongside the typical white dresses and the exchange of vows, but given that I’m whiter than mayonnaise, I can’t really speak with any authority if they are accurate or well received.

I’m happy with his alliance though, and it seems more important than ever with the backlash queer people face when they’re portrayed in popular media. Sure, I had to be drunk to actually enjoy the gameplay, but I’m incredibly happy with how far it’s come to walking a same-sex couple down the aisle without needing to search online for mods.