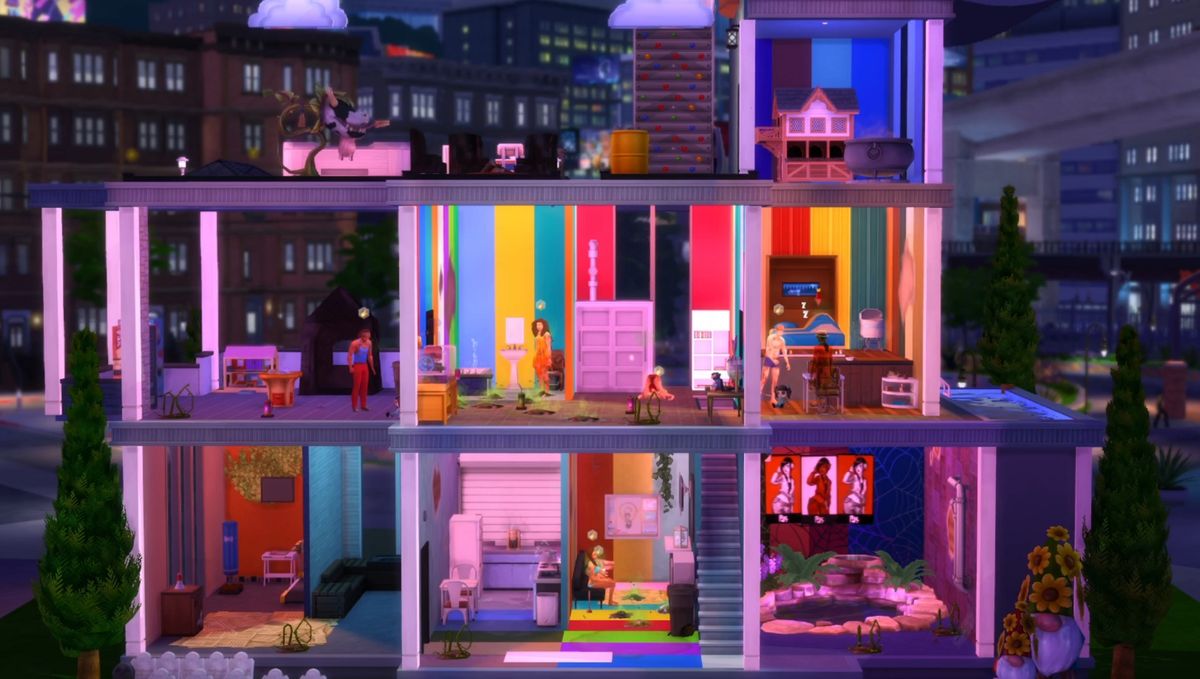 Sims players have come up with all kinds of community challenges over the years, from raising 100 babies to starting life cashless in Rags to Riches. The latest doesn’t yet have a catchy name, at least not that I’ve spotted, or formalized rules, but it’s absolutely a challenge. Not for gamers though. No, this one is for the Sims themselves. Can they survive 24 hours in the real world unsupervised? Rarely.

What I’ve personally called the “non-stop challenge” isn’t entirely new. Livestreamer Lilsimsie left her Sims to fend for themselves for hours at a time years ago, returning to fictional house fires, deaths and immense property damage. She and other Simmers are now leaving their Sims alone on purpose, challenging little AI humans to make as much of a mess as possible in homes that are designed entirely to murder them.

Over the past month, more and more Sims streamers have pushed their Sims into cursed dollhouses. These unconventional homes are open on one side, giving viewers a better view of the chaos within. They’ve also enabled all of the available bundle challenges: spooky (attracts ghosts at night), cursed (more likely to die from electrocution or exhaustion), gremlins (things in the house break at night), and others . They make sure to add murphy beds and cow plants and other decor that can get killer. Then they leave their Sims to their own devices for hours of real-time and weeks of Sim-time.

Unlike people, Sims have little interest in staying alive. Even with their simulated autonomy maxed out, they’ll make terrible decisions like playing video games all night surrounded by dirty dishes. Okay, maybe that’s not a big differentiator. They will make terrible decisions like building snowmen in the yard instead of fixing their broken appliances.

All manner of mayhem ensues: fires galore, deaths, hauntings, and babies. Live broadcaster spring sims got into the trend, telling me that “having a lot of challenges and making it a haunted house made it so messy I lost six sims in three hours” and that one of her Sims “had three kids and three baby daddies, but somehow they die the day after a fire, so we think she’s planning something with the Grim Reaper.”

He’s been trying to see how many achievements his Sims can rack up overnight, and has set personal rules for his own non-stop runs, like having a full household of eight sims (for maximum suffering), kitchen appliances of poor quality more likely to catch fire, and only one shared bathroom. Simmers have always been incredibly sadistic.

In order to keep the clock ticking, some mods and cheats are needed to keep Sims paying their bills and not being interrupted by in-game pop-ups. (This is households.autopay_bills and ui.dialog.auto_respond using TwistedMexi’s cheat modexplains SpringSims.)

I’ve watched a few of these uninterrupted hellhouses on Twitch, and despite all the deaths, they’re a good vibe to my day. Rather than nail-biting a minute, they’re more like a Twitch Plays stream (where no one is playing) or one of those cute animal cam streams. Every now and then I look up at the muffled sounds of screaming to find yup, another Sim on fire. How cute.

Dollhouses of Death has been great background music lately, so now I’m looking forward to someone naming this challenge and making the rules official.