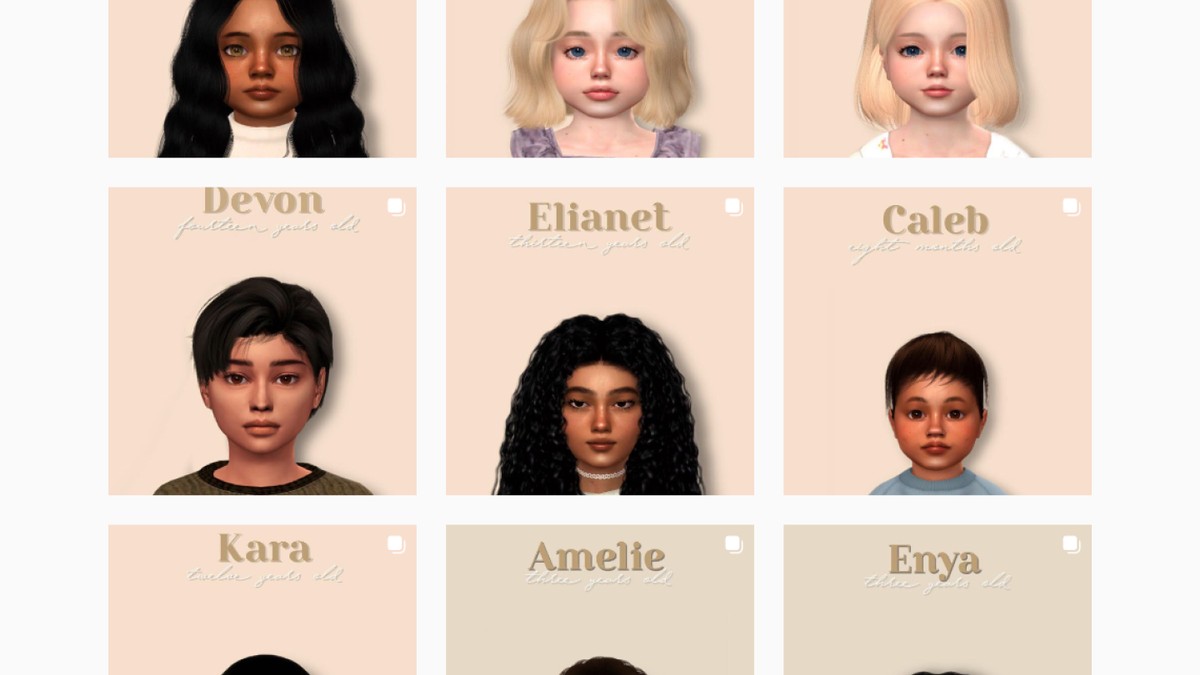 I Tried to Adopt a Traumatized Sims 4 Baby on Instagram

Of all the babies and kids posted on various Instagram accounts that I tried to adopt this week, I think I like Audra from Bee Adoptions the best.

From the background attached to photos of her on Instagram, Audra, an adorable 6-year-old girl, is allergic to dairy products and also suffers from asthma. She also has a background full of ironic tragedy. You see, Audra was raised in a loving family of God-fearing people until relatively recently, when her entire family was hit by a tractor-trailer on the way home from a church function.

Sims like these are lovingly created and then released for adoption by Simmers on Instagram, which they more commonly refer to as Simstagram. Most Simmers use Instagram for role-playing, given that it’s a social media platform focused primarily on stills. They claim that their Sims run the Instagrams themselves, posting as if they were influencers. The scenarios cover the full range of pregnant teens on the run to more generic family drama, and just like real influencers, these Sims grow up, marry, and eventually have or adopt children. Sims adoption agencies like Bee Adoptions were recommended to Waypoint by Instagram when viewing family influencer-style Simstagrams.

Many of these adoption applications ask for age, profession, and the type of home they would be raising the Sim in. An application I filled out asked if any of the Sims in this household had a criminal history. But more often than not, they’re another space for Simmers to use the game to tell stories – essentially, you’re being asked to plead your case and prove to the agency that you’re the best person to raise this child Sim.

“I have always seen adoption reflected on TV and other media as one of the best ways to grow a family,” she said. “Because the parents of these kids in the system have let them down and they need to know that someone else can love them.”

“Growing up, I was always intrigued by adoption and foster care and I really believe it’s such a beautiful thing,” she said. “It’s something I hope I can do one day.”

Like Audra, many of the children Oceanne has created for adoption have gone through traumatic events. Emy, whose description mentions that she will need therapy to deal with her negative emotions. Apparently, Emy was badly neglected by her parents, who eventually lost custody. Delilah and Skye, available from Forest Fern Adoptions, were both abused by their parents. Although these are both sad but mundane stories of child abandonment and trauma, sometimes the stories are more extreme. Delaynee, available from Green Tea Adoptions, is the sole survivor of a triple homicide that claimed the lives of her parents and only sister.

While these stories are extreme, according to the Simmers who tell these stories, they are meant to reflect what they know about how adoption works in the real world.

“Every time I create a child, I try to create diversity and represent the real issues children typically face when they’re adopted,” Oceanne told Waypoint. “For example, I wanted to create a 14-year-old boy who exhibited depression (which is very common among children in the system, especially after a traumatic event), so when creating his story, I decided that the the boy’s parents had been killed by a gunman.

“Most of these stories are tragic, all in order to show the variety of situations children can go through before entering the system, even though those things are rare,” she said.

For other Sims, tragic stories add a sense of realism to the Sims they create.

“A while ago I gave up on creating stories for The Sims, but when I was writing them I was just watching the simulation and ideas were popping into my head,” said Assayah, a 19-year-old Polish woman who runs Olive tree adoptions, another Sims adoption agency, told Waypoint. “I wanted them to be more human-like, which is why most of them had sad stories.”

In SIMs 4, you can adopt Sims in-game by going to an in-game computer, selecting the option to adopt a child, then browsing through the available children until you find one you like. It’s not at all as detailed a process as the one that goes on Instagram with Sim adoption agencies. You must first respond to a detailed request, specifying in some cases whether you wish to foster or adopt a child. Once accepted, the Sim will either be available for download through the Gallery, an in-game resource people use to share Sims they’ve created and more, or as a file to download through your email. From there, you expect to add that Sim to your family and document their growth on your Simstagram roleplaying account.

First of all, The Sims 4 is a game about storytelling, and Sims adoption agencies are another way to fill in the stories that Sims create in-game. When Sims are adopted by these agencies, they often tag the Simstagram of the Sims who are adopting them , so you can follow their journey. Some accounts even have rules about how you can change Sims once they’re adopted, or whether or not you can give them extra trauma or involve them in depressing storylines. These simmers are also very specific about which Sims families can adopt their Sims children.

“When I post [Sims] for adoption, I already thought of a suitable figure of who would be the perfect person to adopt them,” Oceanne said, giving the example of a Sim she created who was abandoned by her mother who should then be adopted into a very loving home. Simmers create adoption requests, usually for you to respond as the Sim who would adopt the child.

“I’m also very careful about what they say on the adoption form,” Oceanne said. “A person with longer, more meaningful answers makes me feel more comfortable giving away one of my children.”

I’m still waiting to hear from Audra, but the idea of ​​my Simself becoming a mom is pretty exciting. Although she currently lives in a rambunctious house with all of her fellow Motherboards, there is enough room in the neighborhood for her to move across the street to a comfortable family home. Also, this way his friends can help co-parenting. In some ways, Sims adoption agencies aren’t that different from the real thing. As I wait anxiously, the Simmers vet my application, looking for signs that I might be able to handle parenting a traumatized child, and all I can do is wait and hope.