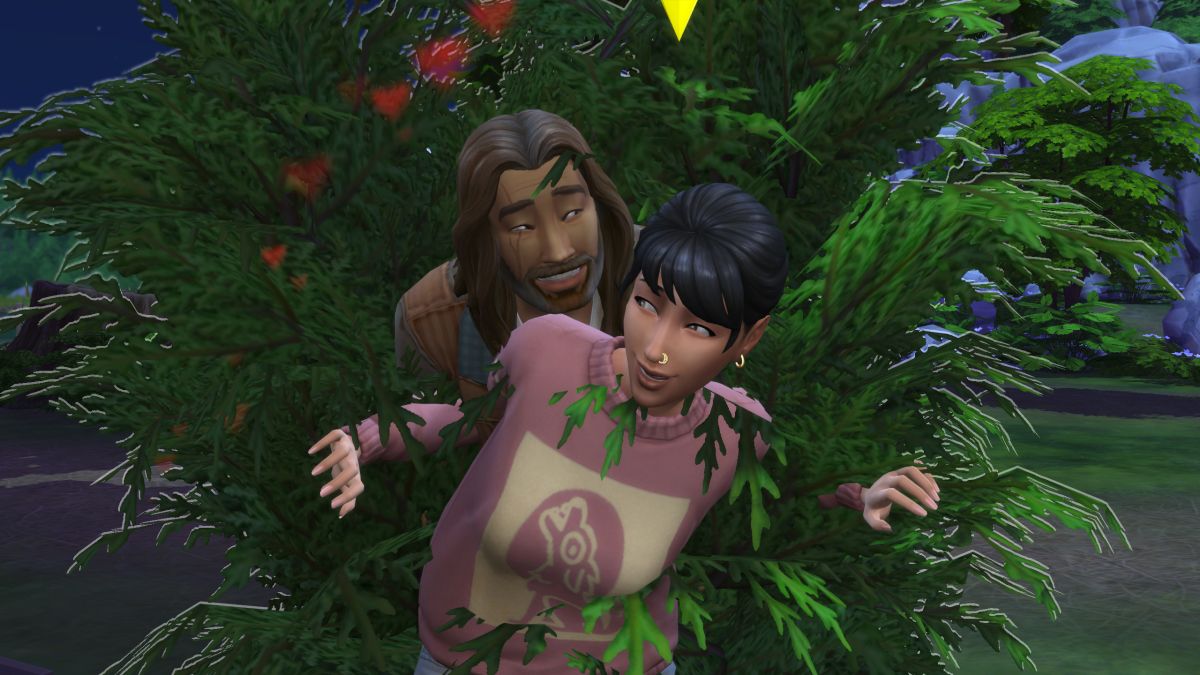 No Twilight dunks. No Teen Wolf gag. No tired references to supernatural teenage fiction from my past youth. These are the promises I made to myself when I agreed to write about the new The Sims 4 Werewolves game pack. And yet, I accidentally ended up mating with an alpha werewolf, joining his pack rivals and making plans to bite his new toddler.

Fanfic writes itself and I am powerless to stop it.

My The Sims 4 Werewolves session started correctly. I created a young adult werewolf with a scooped cut, nose rings, the new cute patchwork baggy jeans in the Werewolves game pack, and allowed the randomizer to name her Margaret Ruff. People who have the Pets expansion will recognize the many fur color, pattern, and paint options available to create a rather unique werewolf with the same tools. I still think they look a bit like Jim Carey in a Grinch costume, but they grew on me.

I (wrongly) expected that I would have to inject some of my own drama into werewolf life, so I made Margaret a vegetarian, a kleptomaniac, and gave her a job babysitting night. Everything turned upside down very quick. Moonwood Mill’s only affordable starter home is actually quite cute as default homes, showing off a bit of rustic flare. At first I thought it was odd that it wasn’t a TV or a computer, until I found out how prone werewolves are, even in human form, to destroying their devices at random with a accidental superhuman strength. Margaret could barely scour the fridge for a snack without breaking it.

I quickly put aside concerns about Margaret’s property, as I couldn’t care less about putting her into an eternal sink, stove and fridge repair routine. Instead, she wandered Moonwood Mill. Frankly, I recommend spending as little time as possible at home because Moonwood is full of common spaces and community grounds. I always felt “eh” about Live Mode, but these areas were definitely worth spending time on.

There is a library and gym in an old warehouse, actually a community center, where Margaret researched the secrets of werewolf lore. There’s a bar with a secret club bunker below where she’s snatched many wolf naps. There are sewer grates full of secrets that she has partially explored.

The most prominent are the Moonwood Collective pack treehouse and the Wildfang trailer, popular hangouts for their respective members. Margaret needed to get into one of those packs for some stability: she couldn’t stop breaking her sink and only had three simoleons to her name. Being fired from her only job – a twice-weekly babysitting gig – for turning into a werewolf in a rage certainly hadn’t helped.

Oops, I courted an alpha werewolf

The Moonwood Treehouse is where Margaret met Kristopher Volkov, the cool alpha male of the Moonwood pack. He seemed like a decent guy, immediately choosing to help quell Maraget’s rising werewolf fury when it presented itself. Each werewolf has a fury meter that fills up over time, especially under a full moon (every eight days by default), and when it maxes out it will lose control, turn into a wolf, and go on a rampage around town scaring others. Sims or destroying their own homes.

Kristopher suppressed his rage meter and offered some explanation: the wolves of the Moonwood Collective aim to master their rage and live in harmony with humans, unlike their rivals the Wildfangs who pride themselves on their wolf strength and consider the Collective’s attitude as a coward. Margaret, a vegetarian evangelist, babysitter and lover of a good cable knit, seemed like the perfect candidate for the Chill Collective.

Kristopher thought so too, because he started inviting himself to her house. Often. Kristopher was so determined to spend time with Margaret, undisturbed by her constantly leaking sink, that I decided, damn it, to let her flirt with him. That decision alone started a drama worthy of a young adult paperback and now I don’t know how to stop it.

As soon as Margaret flirted with Kristopher, I was informed that she had found her destiny mate, the only werewolf she was meant to be with. I tested the boundaries quickly, finding that she was tense flirting with anyone. is not his destiny. I laughed. Of course, my young adult werewolf Sim was destined to be with the gray alpha in his beard, who was an unknown number of years older than her. Immortality is a high level werewolf skill in the tree, after all.

Although I don’t care about my accidental YA novel setup, I rolled with it. Margaret and Kristopher had a whirlwind courtship as many Sims have experienced: flirting on the couch until 2 a.m., a first kiss under a waning moon outside the library, and courtship in a bush across the city.

But Margaret was still a growing wolf. She quickly went from a puppy, to a runt, to a primal wolf. I used her ability points to unlock treasure retrieval, enhanced sense of smell, and night vision skills, while she gained passive abilities like controlling when she entered her wolf form. With each new wolf rank, she also gained a trait that I didn’t choose. She started off excited, gaining more fury while being in a playful mood, which was good.

While I personally appreciated Kristopher’s werewolf philosophy, I knew Margaret was meant to be a Wildfang. She quickly befriended the alpha Wildfang – ideally Kristopher’s adopted daughter – and joined the crew. She got a weekly jerky allotment, a subscription to a werewolf magazine, and the hope that she would start spreading her werewolf prowess all over the world.

It didn’t come between her and Kristopher at first, though I fully intended for her to tell him the rule of Wildfangs very soon, and that sure wasn’t going to go down well. Not two days later, Kristopher called to tell Margaret that he had adopted a toddler, a little girl named Perry who almost immediately developed a grudge against her. Does Kristopher plan to turn her wolf when she’s old enough? Or should I go behind his back and have Margaret do it herself? This furry family tree has taken the shape of a pretzel in a hurry.

The Sims 4 Werewolves might be billed as a game pack, not an expansion, but the new neighborhood, skill tree, super-customizable werewolf form, and built-in drama of wolf life add so much more than what i expected from the game. Normally i turn my nose in live mode and go back to building my little houses, but i need to find out how unbalanced the next chapter of the margaret ruff series is .