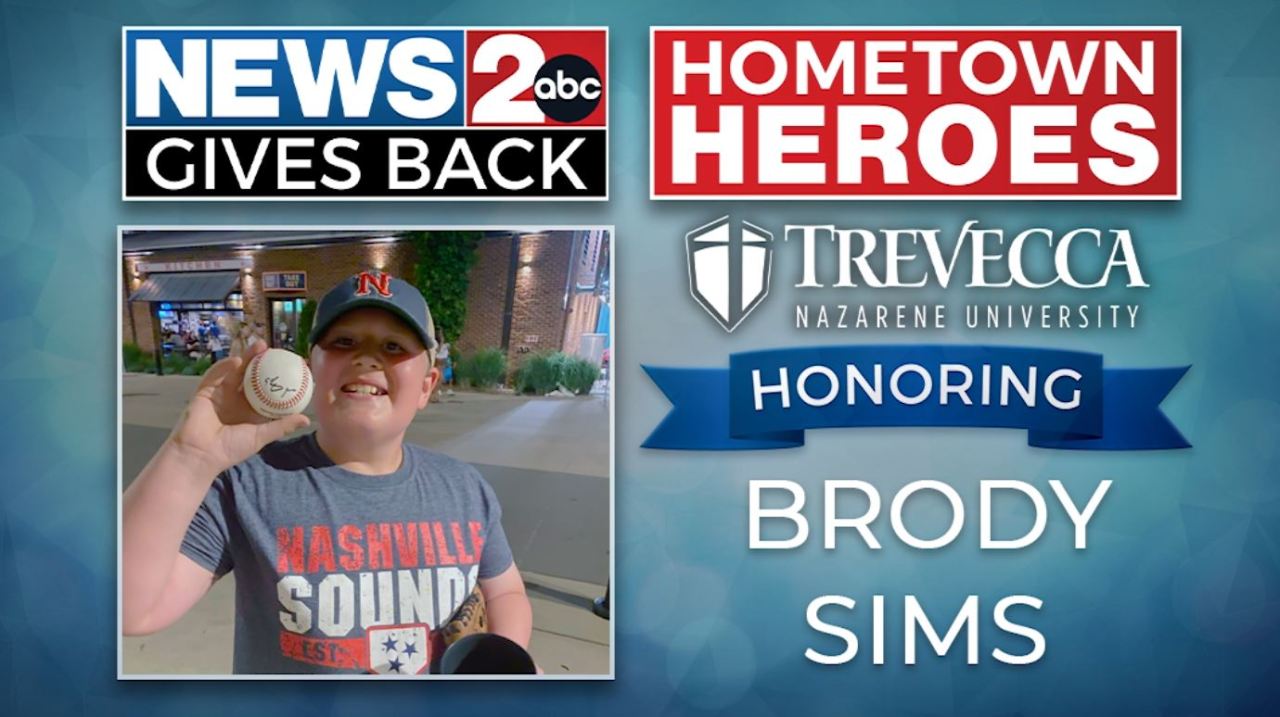 A fire broke out at the Sims’ home in Clarksville just before Christmas last year.

“We were at my parents’ house, they live just down the street. We let their dogs out.

They normally take children, but it was raining and one child was sick. Eleven-year-old Brody knows CPR and knows what to do in an emergency.

They were only to be absent for ten minutes.

“I was sitting on the couch looking at my phone, and then my two sisters were playing in their bedroom. Paisley came out of her bedroom, and she went into the kitchen, and she yelled fire, then she got out running from the house. My big sister came out of her room, she looked and then she started crying. The counters were full of fire and the stove and then all you could see was the microwave that was starting to melt,” Brody Sims said.

The only one left inside was Brody’s two-year-old brother.

“I told him to get out and I felt weak so I had to grab his arm and leg to get him out of the house,” Brody said.

“She was just like mom there’s a fire, I’m like what you mean there’s a fire? We saw the fire truck leaving the fire station which is right next to my parent’s house.

Back home, Brody makes sure his siblings stay out, then comes inside to try and save his burning house.

“It was 11 years of our life in this house,” Brody said. “I ran over and grabbed a mug from the fireplace and tried to put it out because the flames were too big.”

Firefighters arrived and quickly extinguished the flames. Brody’s heroic efforts were honored by the Clarksville Fire Department as Brody and his siblings were specially escorted to Brody’s school.

“We wanted to recognize him and all of them for what they did,” said Clarksville Fire Chief Freddie Montgomery, Jr.

Brody loved the experience the firefighters gave him and his siblings.

“It was super fun as they gave us presents and took us for a ride around the neighborhood.”

“Well, Brody is a hero because he took action. He basically acted on those things that we try to teach at an early age in our public education and fire prevention curriculum. He saw a potentially dangerous situation and he was brave and took the lead in this situation.

Fire safety has also been a priority for the Sims family. Years ago, they even visited the same station that responded to their house fire. This was to reinforce their family’s fire safety plan.

“We have always taught our children if there is a fire, the first thing to do is get everyone out of the house and make sure everyone is safe, and call 911 as soon as you get out of the house, then wait for help. “, said Kimberley.

After that fire, Brody had an extra lesson to learn.

“We had a conversation with him that next time don’t go back inside to see if you can put out the fire.”

And a lesson Clarksville Fire Chief Montgomery says every parent should teach their children.

“Making sure your kids know how to call 911 and know their address and that speeds up that process, helps us get there a lot faster.”

So we pay tribute to Brody Sims as the News 2 Gives Back Hometown Hero for the Month of February, presented by Trevecca Nazarene University for helping to rescue his siblings from their burning home, saving lives.

If you would like information on creating a home fire safety plan, Click here. You can also learn about the state program that provides free smoke detectors and their installation.