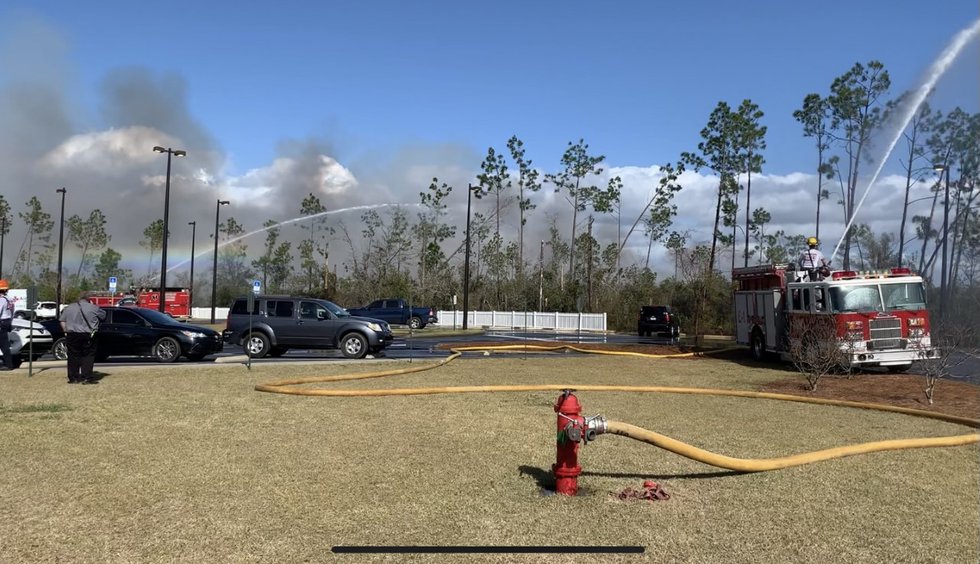 According to Springfield Fire Chief Brian Eddins, the Star Avenue fire covers 400 acres and is 10 percent contained. He said crews would come out overnight, while the Florida Forest Service put out more lines to help contain the blaze.

The Star Avenue fire that prompted the evacuation of Clifford Chester Sims’ state veterans retirement home covers about 40 acres and is 45% contained, according to Bay County emergency officials.

They say Tram Road from Hwy 98 to Star Avenue is closed.

Bay County Transit helps bring residents of the retirement home to safety. We’re told that of the approximately 90 patients who were at the home, 90% were taken to the Bay County Fairgrounds. This is where an evacuation shelter has been set up for those mandated to leave their homes. We are also told that bedridden patients have been taken to local hospitals. They say this evacuation was out of caution and there is no damage to the building.

Bay County emergency officials say the Bay County jail is not evacuated at this time. They say the prison is currently in no danger. At a press conference held by Governor Ron DeSantis, Bay County Sheriff Tommy Ford told the public that a plan was in place if the jail had to evacuate.

Another wildfire has broken out in Bay County, this time prompting the evacuation of Clifford Chester Sims’ veterans retirement home.

Bay County Sheriff’s Deputies are closing Tram Road from East 15th Street to North Star Avenue while the retirement home is evacuated. They say there is no traffic in the area and if you need a detour take Hwy 22 to Callaway.