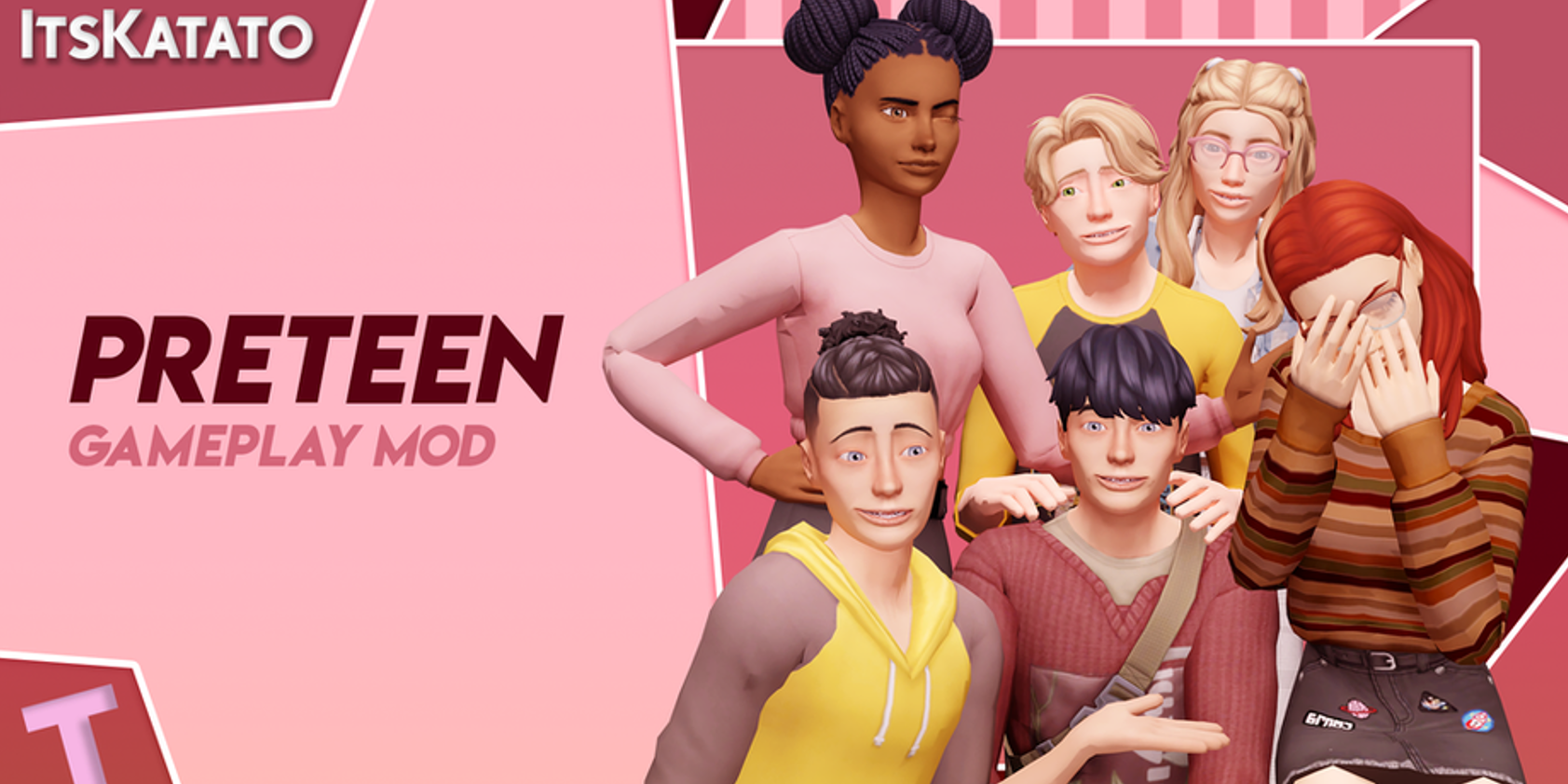 Everything You Need To Know About ItsKatato’s Pre-Teen Mod

It’s hard to believe that teenagers didn’t appear in The Sims games before The Sims 2. In fact, The Sims only had three life stages: baby, child, and adult. Since The Sims 2, seven life stages have become standard, as toddler, teen, young adult, and elder have been added to the mix. But many Simmers still feel like a stage in their lives is missing: tweens.

RELATED: The Sims 4: Mods That Bring Features From The Sims 2 & 3 (Plus One Bonus Mod)

The differences between kids and teens, or teens and adults, varied in The Sims 2, 3, and 4. In The Sims 2 and The Sims 3, teens looked different from adults. They were noticeably shorter, had different interactions, and even different clothes. In The Sims 4, however, teenagers are more like adults than they ever were. While it’s great that teens can now share clothes with adults and elders, some Simmers feel like teens have lost their childish touch. For gamers who wish their teenage years were more like… well, teens, ItsKatato’s pre-teen mod adds a whole new stage of life to the game, complete with college, mood swings, and all the other joys of being a tween.

As a child ages in the game, they will age with a pre-teen trait. If you create a tween in Create-a-Sim (CAS), they won’t automatically be assigned the trait, but they can still be manually turned into a tween by going to the tween sector menu and selecting “add tween”. . trait.” This works like any other normal trait in the game; it is not a reward trait, so it will take up one of two trait slots (both tweens and teens have two slots for traits).You can still edit your Sims’ traits here, just like you would if they were teenagers. This way, Sims can unlock one trait as a preteen and another as a teenager – which somehow makes it seem like your Sims can have more traits than they could in the vanilla game.

ItsKatato’s inspiration for this mod came from the fact that teenage Sims look too much like young adults. Many players tend to rejuvenate their teenage Sims as they grow older to mimic the younger tween look.

Now tween sims will automatically look younger than teens. They will be smaller than teen or adult Sims, and their facial features will appear softer and younger. They also look more animated, but these Sims still fit perfectly into a vanilla game. The mod supports default skin overlays, skin details, and other CAS content, so your tweens will always match other Sims in the neighborhood.

Instead of going to high school, all pre-teens are automatically enrolled in middle school until they turn teens and start high school like the rest of their Sim peers. Middle school works the same way as elementary and high school: it’s a rabbit hole that your Sims will frequent Monday through Friday. Tweens even have their own homework books — they look like high school homework books, but in red instead of blue so they’re easy to identify. If a pre-teen Sim loses their middle school assignments, another book can be purchased on the computer, just like other assignments.

With The Sims 4: Parenthood installed, teens will experience random mood swings. They are powerful emotional addicts (usually anger, sadness, or embarrassment) exclusive to the adolescent stage of life. These are hard to get rid of without a lot of effort and they usually last for a few days in-game.

Pre-teen Sims will also experience mood swings, but they’ll experience them more frequently than teens, and ItsKatato says they tend to happen quickly. They seem to be just as intense, too. Luckily, none of these phases involve the bear suit like the childhood phases do.

This mod adds an in-depth hygiene system for pre-teen Sims. Preteen Sims can now apply Body Spray, Deodorant, and Lotion. Following hygiene routines will bring positive improvements to Sims, but using too much or too little can have consequences. Using lotion after showering will give Sims skin that is soft to the touch, but their skin will turn dry if they forget. Applying deodorant slows the deterioration of hygiene for any Sim wearing it, and deodorant and body spray make Sims smell nice. The body spray will also give Sims a confidence boost, but using too much will make them dizzy. Pre-teen Sims can also have voice issues, but there’s no silver bullet for this; it is part of growth.

3 Tweens work with all lifespans

This mod works with short, normal, or long lifespans, but it does require a bit of setup. This means that the mod files must be modified when the game is closed, using the configuration file generated with the Mod. To change the lifetime settings, change the “preteen_agespan” value in the config file to the number of days you want your Sims to be preteens.

The default number is 7 days, but you can change this number as you see fit. However, you may want to align your preteen lifestage with the game lifespan. In The Sims 4, Sims are teenagers for 7 days in a short lifespan, 13 days in a normal lifespan, and 52 days in a long life.

To use ItsKatato’s Pre-Teen Mod, you need to have The Sims 4: Parenthood game pack installed, as well as Lumpinou Mod Mood Pack. The Sims 4: Snowy Escape was also used, but only for animations. So for players who don’t mind some missing animations, the mod is totally usable without Snowy Escape. ItsKatato’s Preteens Mod is also compatible with Adeepindigo Education Review Mod.

If you already use Education Overhaul, you can download a Pre-Teens add-on to integrate college features.

ItsKatato is already working on new updates for the mod. These will come in modpacks meaning they can be easily added and removed without affecting the base mod. The first to come appears to be a new romance system specifically for tweens, to make romantic interactions more age-appropriate. Other planned updates include a College Deep Pack, Self-Care Pack, and Puberty Pack, which will likely add more depth to the hygiene and mood features already released in this first release.

NEXT: The Sims 4: Ways To Make The Game Interesting Again

A bold move if true, but even the biggest companies have to start somewhere if they want to break into the console market.