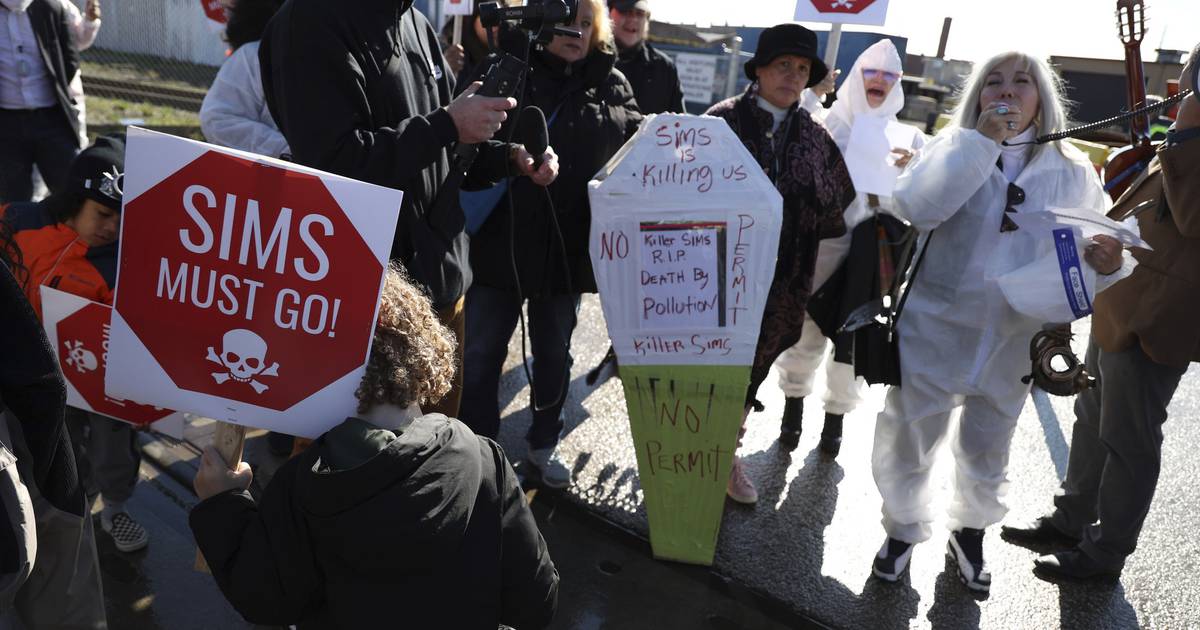 At a protest outside Sims Metal Management on Saturday, representatives from the Southwest Environmental Alliance coalition announced that the public meeting for the facility’s operating license scheduled for Oct. 19 has been postponed until data is released. on the alleged effect of Sims on air quality be published by the United States Environmental Protection Agency.

Sims Metal is a scrap metal recycling facility in Pilsen with a history of alleged environmental violations. Most recently, in October 2021, Illinois Attorney General Kwame Raoul sued the facility, alleging it was emitting uncontrolled levels of volatile organic matter, which are harmful chemical compounds. Sims has applied for business license renewals with the state and the city, both of which are pending.

Saturday’s protest began at Benito Juarez Community Academy, 1450 W Cermak Rd., located less than half a mile from Sims. About 50 participants marched from high school to The Sims, carrying red signs that read “The Sims Must Go!” and chanting “no justice, no peace”. Children wore gas masks and people carried a small coffin with the words “Death By Pollution”.

“I want you to be very aware of what you’re breathing,” Reverend Emma Lozano, pastor of Lincoln United Methodist Church, said at the protest. “You smell this odor very, very strong…it smells awful.”

The October 19 public meeting with the Chicago Department of Public Health was to hear community feedback on Sims’ business license application.

But at Saturday’s protest, Theresa McNamara, president of the Southwest Environmental Alliance, announced the meeting would be postponed, to cheers from protesters.

“We’re trying to delay them as long as possible because we want to see a cumulative impact study,” McNamara said.

Its postponement comes following significant pushback from the community. Both Alds. Byron Sigcho-Lopez, 25th, and McNamara sent requests to CDPH for the department to wait for air quality data.

The Chicago Department of Public Health said in a statement Saturday that the department decided to postpone the Oct. 19 meeting “in consultation with the community.” The department “had always intended” to consider this data in its final decision on the permit, according to the statement.

“We will continue to welcome feedback from residents of the surrounding community about their concerns about this facility or their ideas for Sims as a good industrial neighbor,” CDPH said in the statement.

Air quality monitoring around Sims began September 23 pursuant to a US EPA mandate to determine the facility’s compliance with the Clean Air Act. Sims is also required to test its emissions as part of a pollution control building permit that the Illinois EPA approved this month.

Outside of these ongoing efforts, there are no reliable measurements of the amount of emissions from Sims, according to the US EPA. Without that data, advocates say there can’t be a fair process because Sims’ business license application is pending.

Information from the September 23-30 monitors must be submitted to the US EPA by October 30 and will be released in November after a review period.

At Saturday’s event, Lozano demanded that the city reject Sims’ business permit because of the historical environmental burden of industries on the neighborhood, including lead contamination in the ground and more than a century with a coal-fired power plant.

Saturday’s march was announced at a public meeting at St. Paul’s Catholic Church on Sept. 29, when Lozano said the protest was meant to send a simple message: Sims are not welcome in their neighborhood.

“The city and state call us ‘sacrificial communities’ — they understand we’re paying the price for other communities to breathe clean air, but they don’t do anything,” Lozano said Saturday.

Lozano also cited the federal Department of Housing and Urban Development’s investigation, which found the city was encouraging polluting industries to move from white areas to black and Latino communities. HUD threatens to withhold hundreds of millions of dollars in funding as community members urge Mayor Lori Lightfoot to reach a resolution.

The best stories from the editors of the Chicago Tribune, delivered to your inbox every afternoon.

“We say: No money for Chicago,” Lozano said.

In response to Saturday’s protest, John Glyde, chief operating officer at Sims Metal, said in a statement that Sims is invested in “being a good community partner,” citing its investment in emissions control and the added air quality monitors. Both actions were required under state and federal regulatory measures.

During the protest, Sigcho-Lopez called on the state and city to delay granting any business permits until there is ‘due process’ through data reviewed by the US EPA and a Cumulative Community Health Assessment.

“We are no longer a sacrifice zone, and now is the time to change that,” Sigcho-Lopez said.

Sigcho-Lopez wants to see the same outcome as the southeast side after the city rejected the Reserve Management Group’s operating permit in February. RMG is another big scrap metal recycling company that closed its Lincoln Park plant before trying to open another on the southeast side.

“It’s not safe on the southeast side, it was not safe in Lincoln Park, it’s definitely not safe here,” Sigcho-Lopez told the Tribune on Saturday. “So what we’re asking is to move.”

Everything in The Sims 4 Modern Men’s Clothing Kit